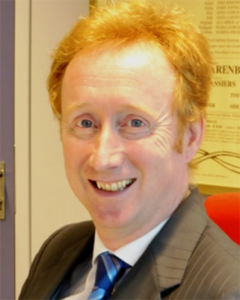 Originally from Ireland, Fearghas O’Beara works at the European Parliament in Brussels, Belgium, where he has headed since 2020 the Structural Policies Unit of the Research Service, a unit which covers research on cultural and religious issues for Members of Parliament. From 2017 to 2019 he coordinated the Parliament’s dialogue with churches, religions, and philosophical organisations, advising the First Vice President
of the Parliament responsible for this dialogue. Following his work on religious dialogue, he took a sabbatical year from the EU to begin work on a Doctorate in Public Ethics at the Pontifical Gregorian University in Rome. He continues to work on his thesis, which seeks to explain why EU institutions have adopted a post-secular approach to religion/state relations, in contrast to many strictly secular EU Member States. Before moving to Brussels in 1997, O’Beara completed a masters in EU politics and law at University College Dublin. During his career at the EU Parliament, he has worked in a variety of functions, including as an adviser to two Presidents, for whom he was also responsible for intercultural and interreligious dialogue, including managing the European Parliament’s programme for the European Year of Intercultural Dialogue 2008. O’Beara holds a bachelor’s degree in Education from Trinity College Dublin and worked for a number of years as an educator in Ireland, the UK and Kuwait, before pursuing his post-graduate studies. He lived in Iceland for 14 months where he worked as a church administrator. An avid traveler, O’Beara has visited most countries in Asia, where he has a particular interest in studying the conditions for religious freedom and prepared country reports for the European Parliament’s Intergroup on Freedom of Religion or Belief.