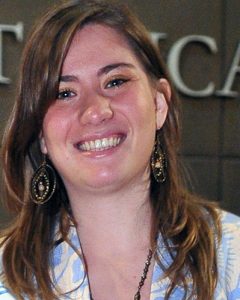 Elena López Ruf is a lawyer. She graduated from the Faculty of Law of the Pontifical Catholic University of Argentina (UCA) where she teaches Philosophy of Law, and she is currently pursuing a doctorate degree in law. She coordinates the program Religion and Development of CREAS (Regional Ecumenical Center). Previously, she served for four years as advisor at the Religious Affairs office of the government of Buenos Aires City. She is a member of the Youth Group of Argentine Council for International Relations (CARI) and of the Argentine Council for Religious Freedom (CALIR). In 2015, she participated in Summer School Religions in the Global World, promoted by Sophia University Institute, and in 2009 attended the Jewish-Catholic Emerging Leadership Conference in Rome, organized by the Commission of Religious Relations for the Jews of the Holy See and the International Jewish Committee for Interreligious Consultations (IJCIC). She has been involved in interreligious and ecumenical initiatives for more than ten years, particularly with the youth of the Focolare Movement, and has published a number of journal articles on human rights law and religious freedom.